This is part of a review of the 2017 feature film, starring and produced by actress Margot Robbie. It recounts the story of 1990s Olympic figure skater Tonya Harding who gained notoriety for being charged in connection with an attack on rival skater Nancy Kerrigan. Kerrigan would go on to win a silver medal at the 1994 Winter Olympics. Harding would place 8th after a shaky performance and eventually being convicted of acting as an accessory after the fact in connection with the assault. The story is told from the point of view of Harding, her ex-husband Jeff Gilooly (also convicted in connection with the assault) and Harding's controversial mother, Sandra Golden. The role of Golden earned actress Allison Janney an Oscar for Best Supporting Actress. As of March 2018, the entire review can be found online here: ​http://www.tinseltine.com/2018/01/movie-blog-post-i-tonya.html

film review: "beyond the lights"

This is a review of the 2014 feature film, "Beyond the Lights," directed by Gina Prince-Bythewood and starring Gugu Mbatha-Raw, Nate Parker, and Minnie Driver. It was written for the Philadelphia-based film and restaurant review blog, Tinsel & Tine, which has 3000 verified followers. As of November 2015, the entire review can be found online here:
http://www.tinseltine.com/2014/11/have-you-heard-beyond-lights.html

This is a 2015 interview with "Freetown" film director Garrett Batty for the Tinsel & Tine blog. This movie was shot during the Ebola outbreak in West Africa. The entire interview can be found here:
http://www.tinseltine.com/2015/04/freetown-interview-with-director.html

This is a review of the 2015 film, "The Wedding Ringer" starring comedian Kevin Hart as well as Josh Gad and Kaley Cuoco-Sweeting. The entire review can be read here: ​http://www.tinseltine.com/2015/01/have-you-heard-wedding-ringer.html?platform=hootsuite 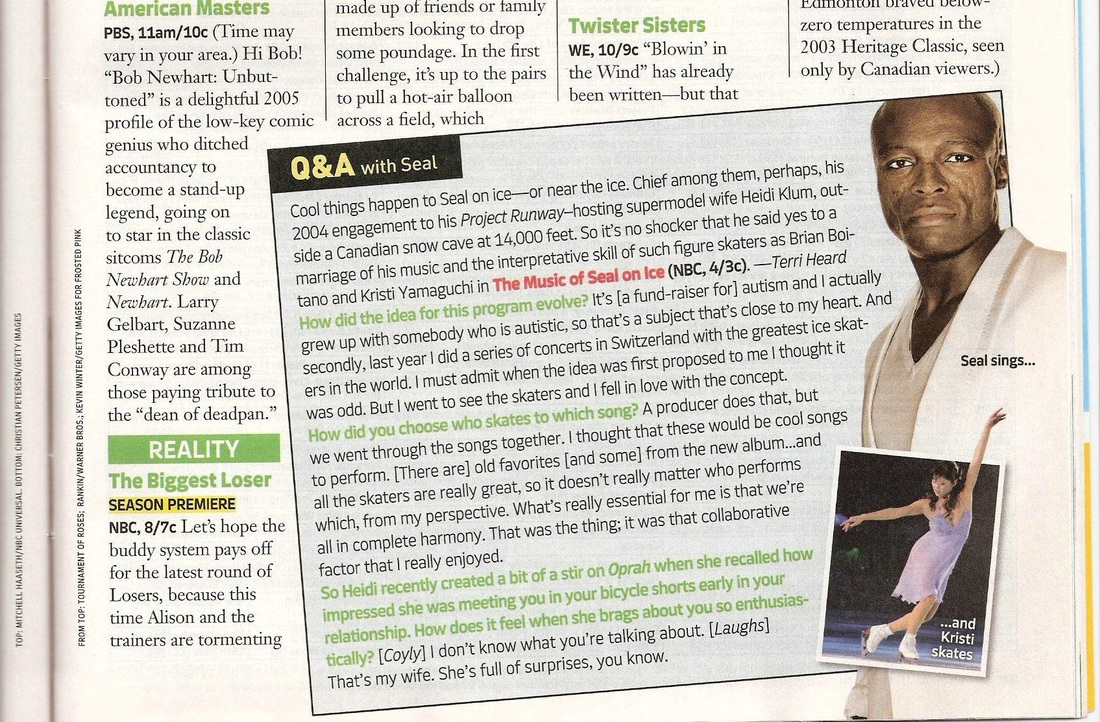 Interview with feature film ("Why Do Fools Fall In Love") and TV mini-series ("Sally Hemings: An American Scandal") screenwriter Tina Andrews for nationally distributed entertainment magazine Sister 2 Sister. Published in the February 2000 issue. This was before she became the first African American to win the Writers Guild of America Award for Original Long Form in 2001 for "Sally Hemings."

As TV Guide made the transition from print to digital, the writers were encouraged to break out of the truncated listings format and stretch their wings in a longer form. Unlike the close-ups, we received bylines and were able to showcase our entertainment knowledge. Below is the May 2000 article I wrote on "Dawson's Creek" the teen soap opera that starred Katie Holmes and James Van Der Beek. Note: this article is no longer available online.

This is article, written for the Philadelphia Tribune's magazine, examined the then-growing trend of using gospel music in commercials and other secular media with an eye toward analyzing potential issues of misappropriation of African-American culture.

This news article, written for the Philadelphia Tribune, covered an appearance by Effi Barry, former wife of Washington, D.C. Marion Barry, who had been embroiled in controversy connected to accusations that the mayor used illegal narcotics while in office. Included below are screencaps of the article pulled from Lexis-Nexis since I did not have access to the original newspaper article.

This article, which won the Temple University School of Communication's Best Student Feature Award, was a lengthy interview with Geneva Lassiter, first African-American nun in the Maryknoll missionary order. The original article, which was the main story of the Philadelphia Tribune's feature section for that day, was unavailable. Below are the screencaps of the article as pulled from Lexis-Nexis.

This is a page from the Winter 2001 edition of Lincoln University's alumni newsletter, the "Lincoln Lion." All three stories, including coverage of the alumni luncheon, information about the construction of new dormitories, and a $7500 donation by the chairman of the music department, were written by me. 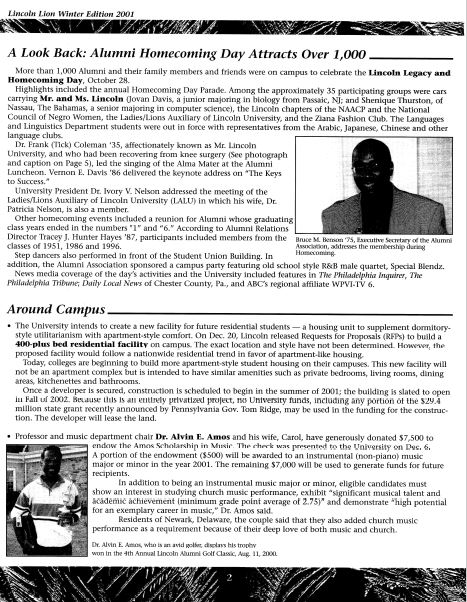